Reflections on spirituality and living wholeheartedly

How to End the Food and Depression Cycle 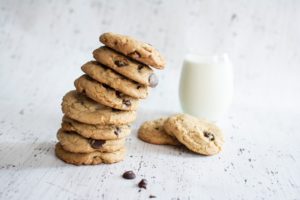 If you battle endlessly with a cycle of overeating followed by depression, you’re not alone. Early in therapy I ask about what foods people eat. I’m amazed at how many people confess to overeating sweets and high carbohydrate snacks.

Our food system excels at selling us tasty and convenient foods loaded with fat, sugar and salt. The inconvenient side effects (at minimum!) are weight gain and spikes in blood sugar followed by the inevitable crash. Feeling low in energy and spacey, we crave more sugar and carbs to feel better, and the cycle continues.

A hidden side effect is shame. So many women have a hard time making eye contact when they talk about overeating. They think something is wrong with them because they feel out of control with food.

Our industrial food system is set up to produce overeating. Food companies grow in profits each year only if they get people to buy more processed food.

I know from experience the cycle of cravings and compulsive eating. When I was young, I thought I was immune from food issues. In my 20s and early 30s, I was a gym rat, runner, cyclist and occasional triathlete. Because I burned so many calories, I got used to eating whatever I wanted.

Then I got a more sedentary job. I love being a therapist, but it does mean I’m sitting all day.

I don’t know how I got there, but I found I was thinking about sweets a lot more than I wanted to admit. On days off I would go to the coffee shop because I wanted to get out of the house to “work.” My half hidden motive was to eat a sugar-sprinkled scone, giant brownie or piece of pie.

My husband and I ate ice cream most nights for years until I found out I had lactose intolerance. So we switched to expensive chocolate bars. Unable to stop eating once I started, I asked him to ration the chocolate to me.

I knew I was behaving like an addict when I started occasionally to hide my eating of sweets from my husband. I would eat a takeout piece of cake and bury the plastic container in the trash. It felt ridiculous and inconsistent with the high value I have for honesty.

The Food and Depression Connection

Why am I as a therapist writing so much about food? Because your food choices have a direct connection to depression and anxiety.

The food you eat may be making you sick not only in body but in mind. A diet high in sugar and carbs results in inflammation in the body and the brain. Inflammation doesn’t sound dangerous, but it now is seen as the leading cause of most chronic health issues.

Brain inflammation manifests in symptoms that have been on the rise in the United States for years, including depression, anxiety, insomnia, headaches, attention problems, fatigue, and brain fog. (Who even heard of brain fog until recently? Now I seem to encounter the term everywhere.)

More disturbingly, long-term brain inflammation is being linked with serious neurological disorders that affect people in record numbers, according to David Perlmutter, M.D., a prominent neurologist and writer about healthy eating. These include Alzheimer’s disease, Parkinson’s disease, Multiple Sclerosis, and autism.

I didn’t realize until I changed my diet how impaired my brain had become. After much initial resistance, I slowly changed my diet to eliminate sugar and most processed foods.

I feel like a different person. My energy is consistent throughout the day, without the highs and lows of the sugar trap. My mental quickness has returned and so has my ability to concentrate. A tendency to depression disappeared, as did the repetitive worries that circled in my head.

I sleep through the night now without insomnia. For most of my life I had such a hard time getting up in the morning that I dreamed of a bed that would eject me and then fold up. Now I wake up early without a struggle.

Even my appearance has improved. I lost weight around my middle. My skin is clear, and the circles under my eyes have (more or less) disappeared.

I cannot emphasize enough – I had no idea how tired and slow in mind I had become until I removed the problem foods. For me, abstinence from sugar, processed fats and flours is essential to removing food cravings. As soon as I put these substances in my body, the cravings start again.

Over the years, I have learned a lot about nutrition and the modern American diet, appropriately nicknamed MAD. Our diets really are crazy if you consider what humans relied on for food for the past 12,000 years of agriculture. Would your grandparents or great grandparents even recognize much of what we eat as food?

As a therapist, obviously I advocate counseling to help you learn ways to change thoughts and behaviors that affect your emotional well-being. But food is an important part of the recovery from depression and anxiety that we too often overlook. I can help you take the first steps in changing your diet and refer you to a nutritionist if you need more comprehensive support.

Sign up below to receive new blog posts on the intersection of mind, body and spirit.

My latest reflections, straight to your inbox